The Poulton Park Flood Study covers the catchment area draining to Oatley Bay via Oatley Creek. The catchment that is the subject of this study is the area bounded by the Illawarra train line between Penshurst and Hurstville stations to the north and Queens Road and Morshead Drive to the south. Connells Point Road represents the eastern boundary while Laycock Road and Waitara Parade provide the western boundary. The catchment covers a total area of approximately 220 hectares (Figure 1).

Overland flooding of the Poulton Park catchment has historically resulted in inundation of private and commercial property and has affected road and property access. Flooding has historically been caused by a range of mechanisms including the accumulation of overland flows in the upper catchment, overland flows exceeding the inlet capacity of the pit and pipe drainage system, surcharging of the pit and pipe stormwater system, flows exceeding the capacity of open channels in the catchment and blockage of the stormwater system inlets.

A flood study of the Poulton Park catchment was undertaken to determine the existing flood behaviour of flood prone areas for a range of flood risk levels from the 20% Annual Exceedence Probability (AEP) event through to the Probable Maximum Flood (PMF).

The surface model allows a distributed, physically based approach to rainfall runoff, with rainfall time series applied directly to a two dimensional grid representation of the catchment surface. Overland flow routing of the rainfall excess is via the two dimensional grid. The sub surface pipe network and overland flow components of the modelling system are linked through dynamic coupling of the model domains via storm water pit linkages. Linkages are automatically configured for appropriate inlet capacity and head loss conditions.

The model was validated against historical flood information for the May 2003 flood event and against regional design flow rate estimates.

Design rainfall intensities and temporal patterns for the required range of flood risk events were obtained from ’Australian Rainfall and Runoff’ (Institution of Engineers Australia, 2001) and ’The Estimation of Probable Maximum Precipitation in Australia: Generalised Short-Duration Method’ Bulletin 53, Bureau of Meteorology (2004).

The flood model predictions indicate that in many areas of the catchment the capacity of existing flow channels, major piped stormwater drainage conduits and road culverts are exceeded resulting in overland flooding for a range of simulated flood risk levels. Plans showing the indicative flow depth and approximate extent of overland flooding for the 1% AEP, 2% AEP, 5% AEP, 20% AEP and PMF flood events are presented in Figures 17 to 21. Water surface level maps for the same events is provided Figures 22 to 26 and hazard classification of the floodplain for the 1% AEP and PMF is presented in Figures 31 and 32. Floodplain classification for the 1% AEP and PMF is shown in Figures 33 and 34.

The developed flood modelling tools and reported flood behaviour for existing catchment conditions can now be used as the basis for developing a Flood Risk Management Plan for flood prone land in the catchment. The hydraulic model developed for the flood study may generally be used to assess the hydraulic impact of proposed structural flood mitigation works on flood behaviour. However the suitability of the model to assess individual options should be assessed to ensure that the specific details of the option can be properly represented in the existing model framework. 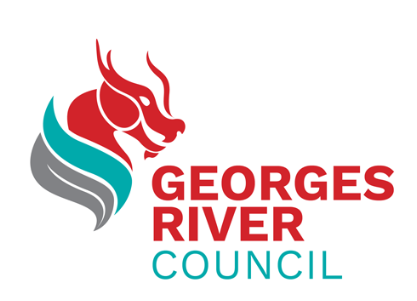 Georges River Council is in the southern suburbs of Sydney on the Georges River and is formed from the former Hurstville City and Kogarah City Councils...